With investments in three neighborhoods and the Ohio & Erie Canal Towpath Trail that connects them, Akron Civic Commons is knitting together isolated communities through collaborative reimagining of public places. Temporary and permanent design features and regular programming are reestablishing the 100-acre Summit Lake as a place of civic pride and play, bridging diverse neighborhoods including Ohio & Erie Canal Park and fostering economic development and public life in Akron’s downtown.

"In Akron, we have prioritized our public spaces because the investments we make in them have a protective function in our neighborhoods. These places are not just where people gather, but are central to our social, economic and environmental policy goals."
–Mayor Dan Horrigan, City of Akron 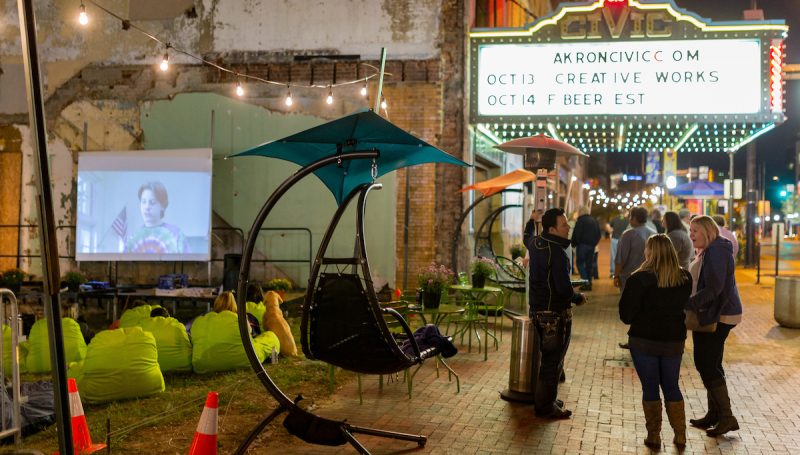 Reimagining the Civic Commons in Akron 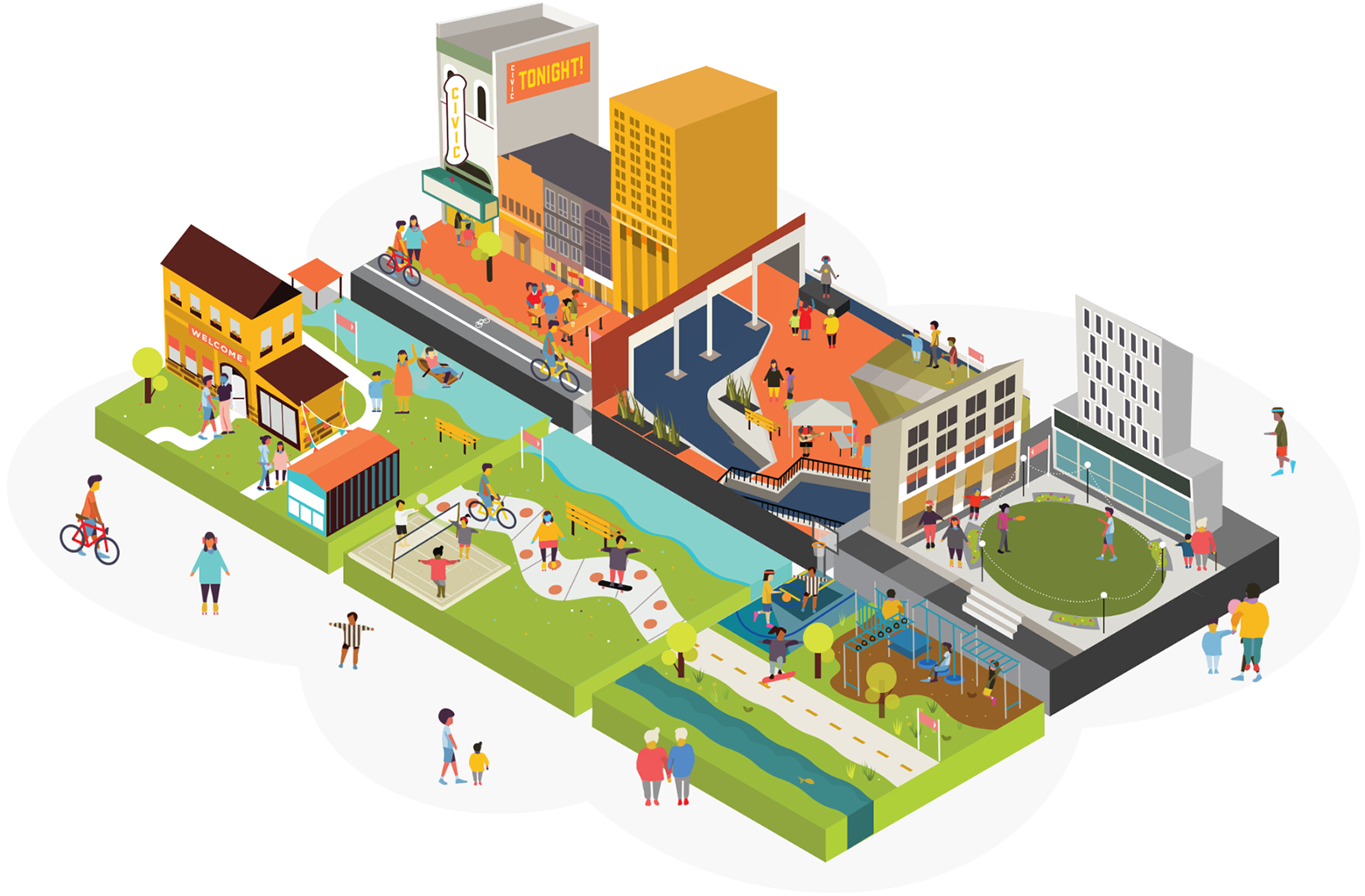 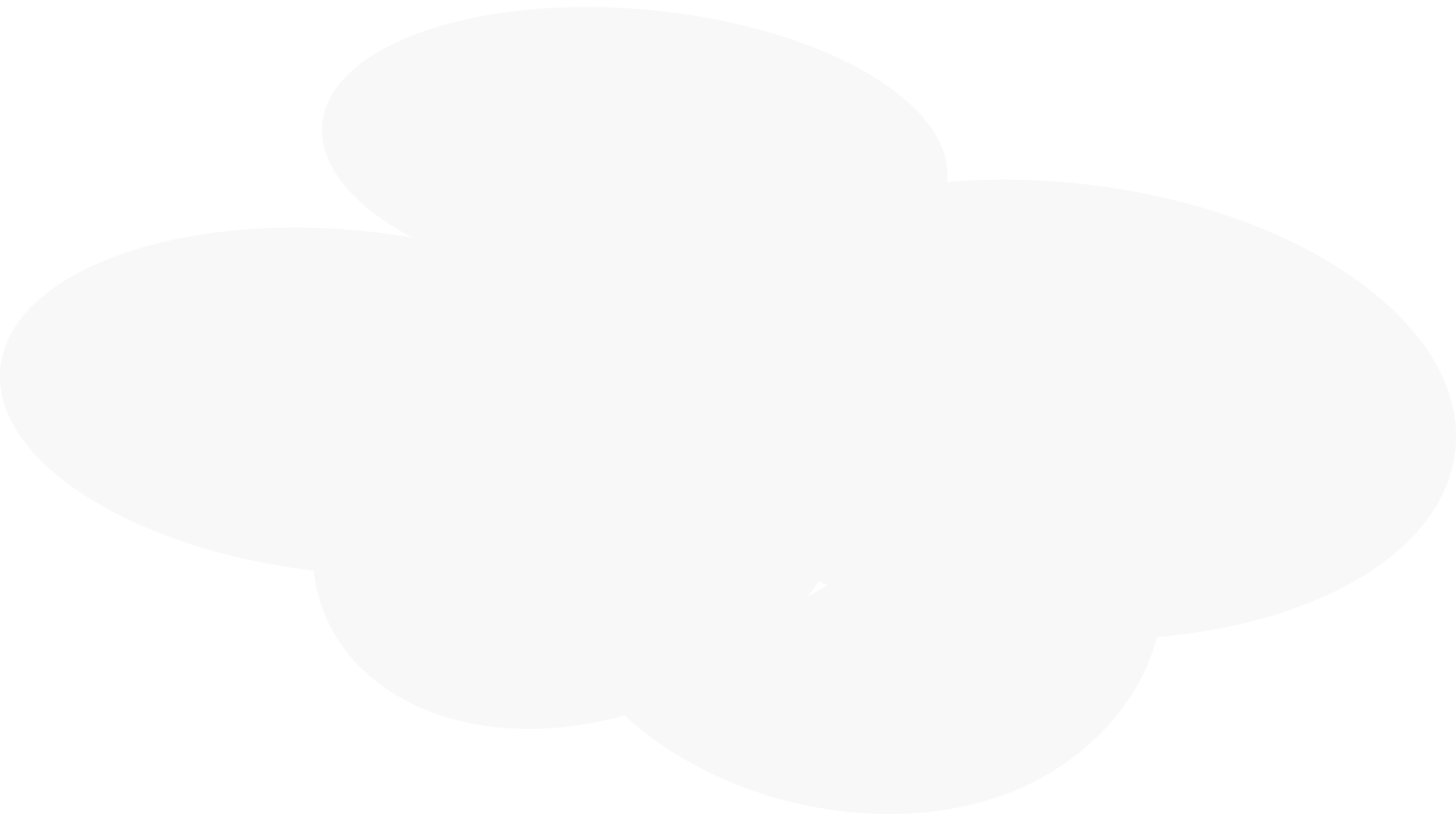 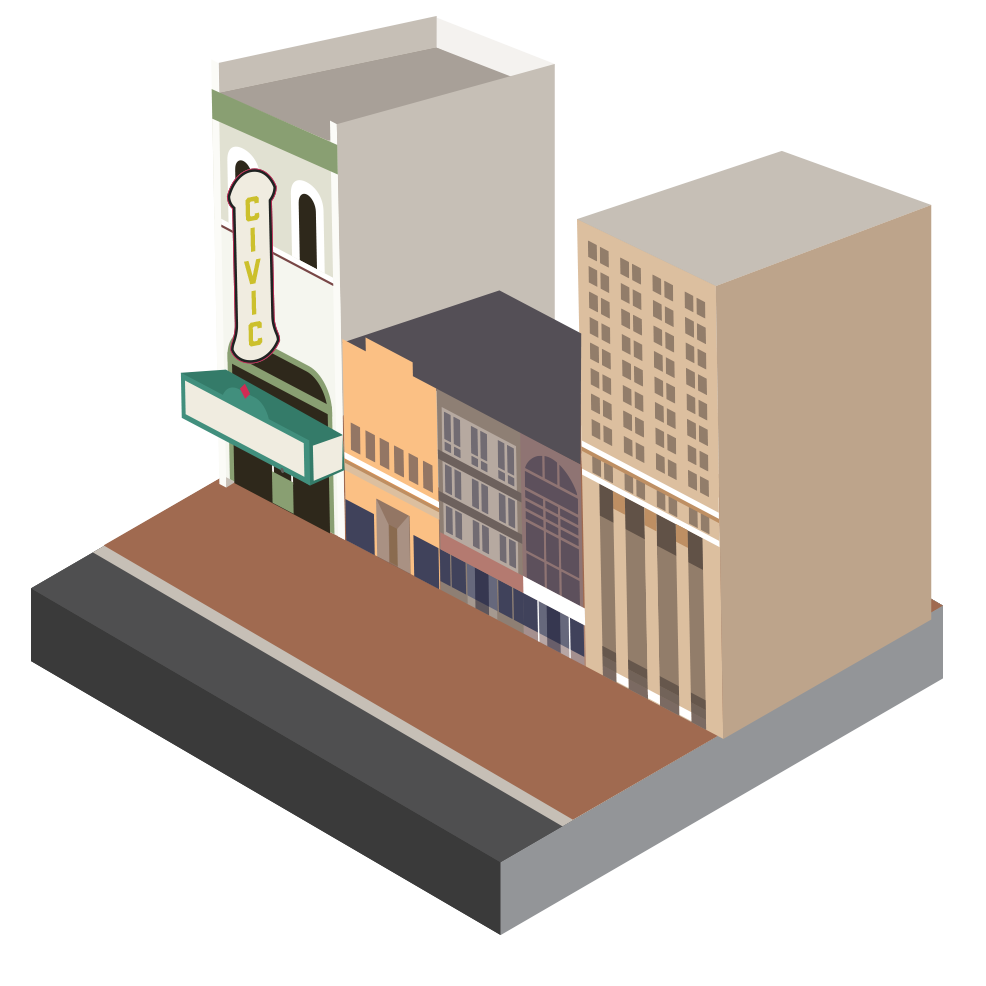 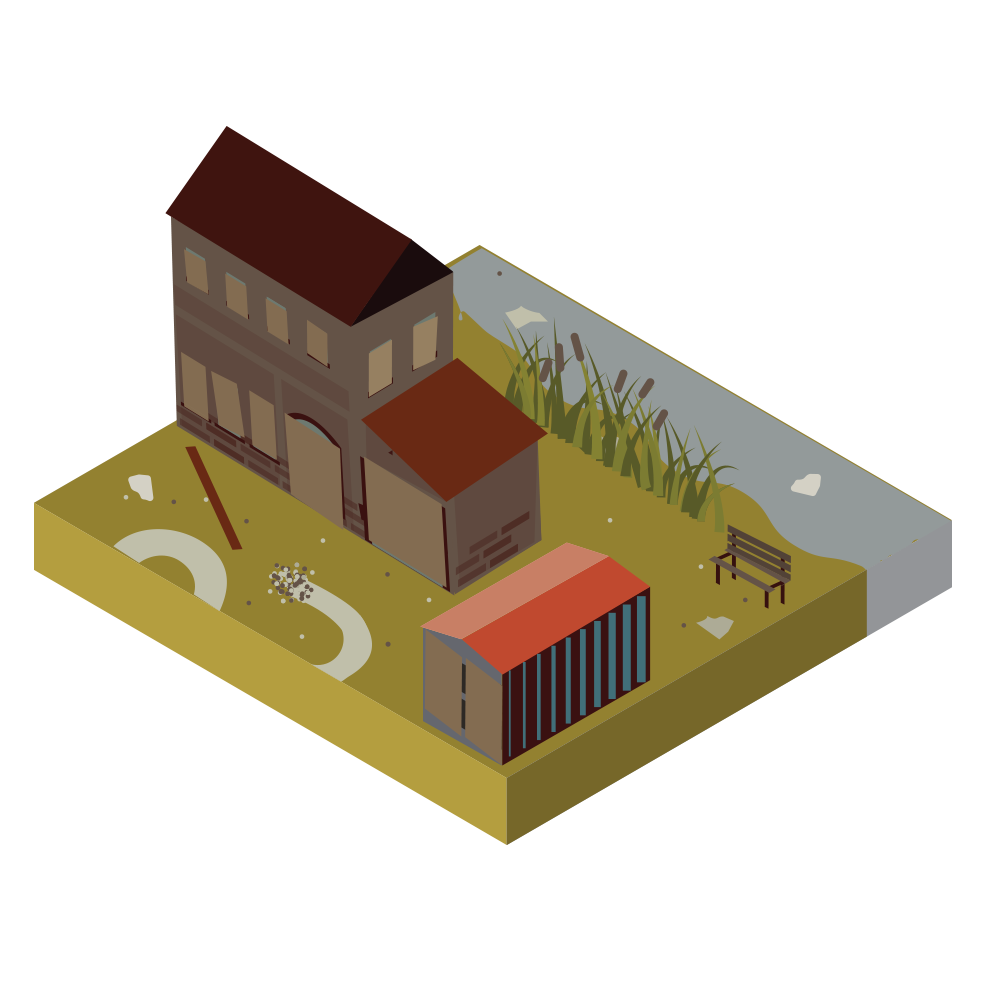 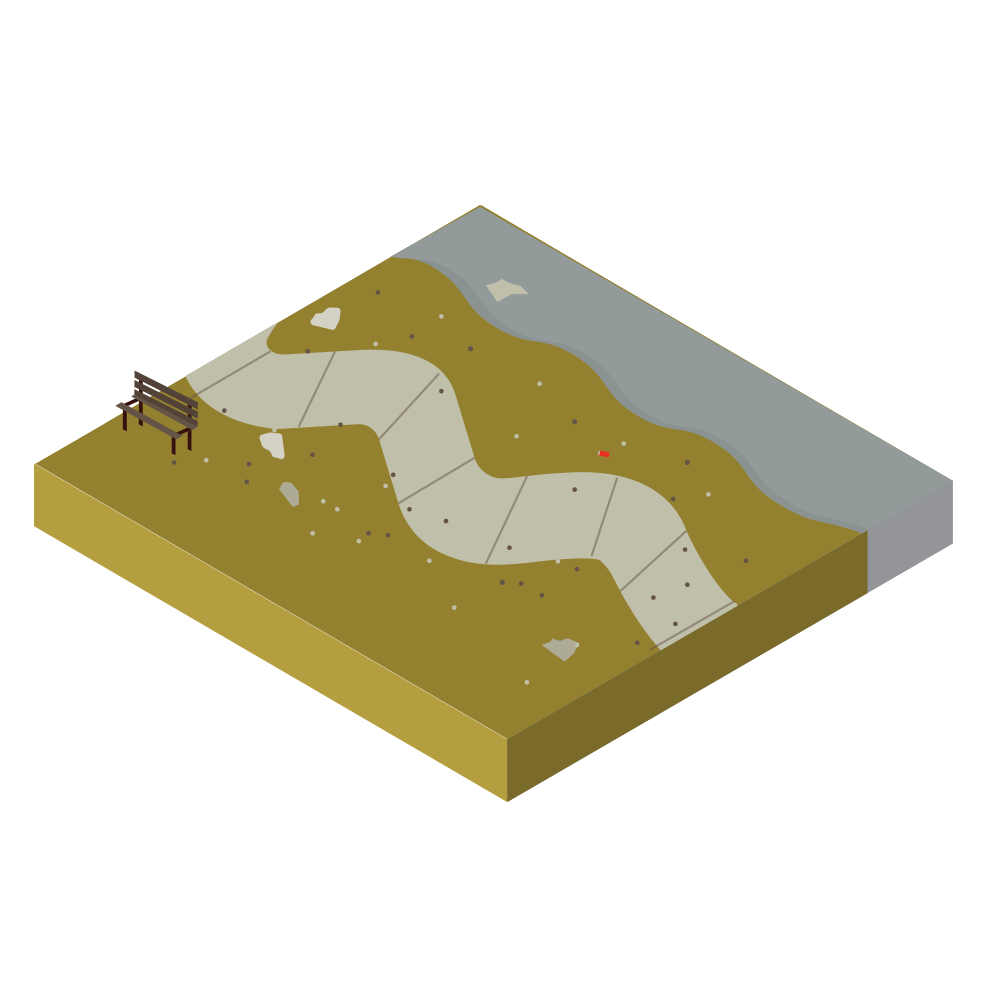 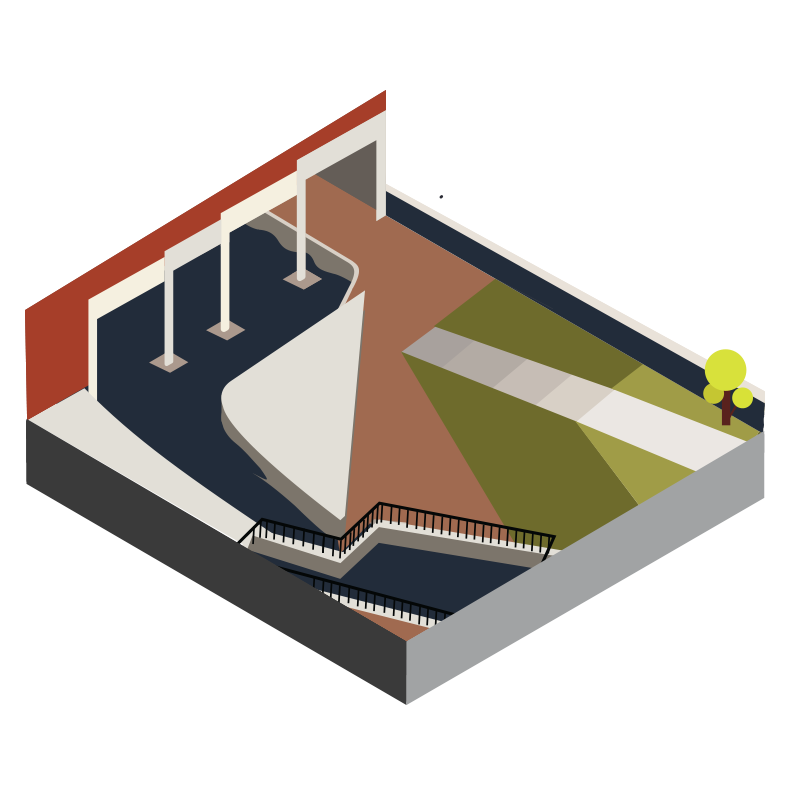 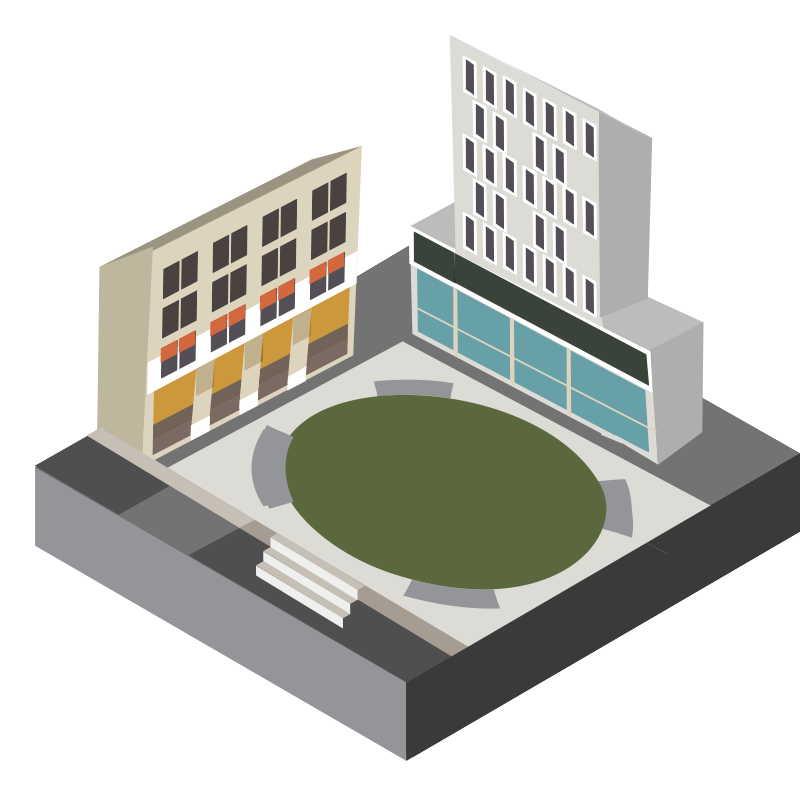 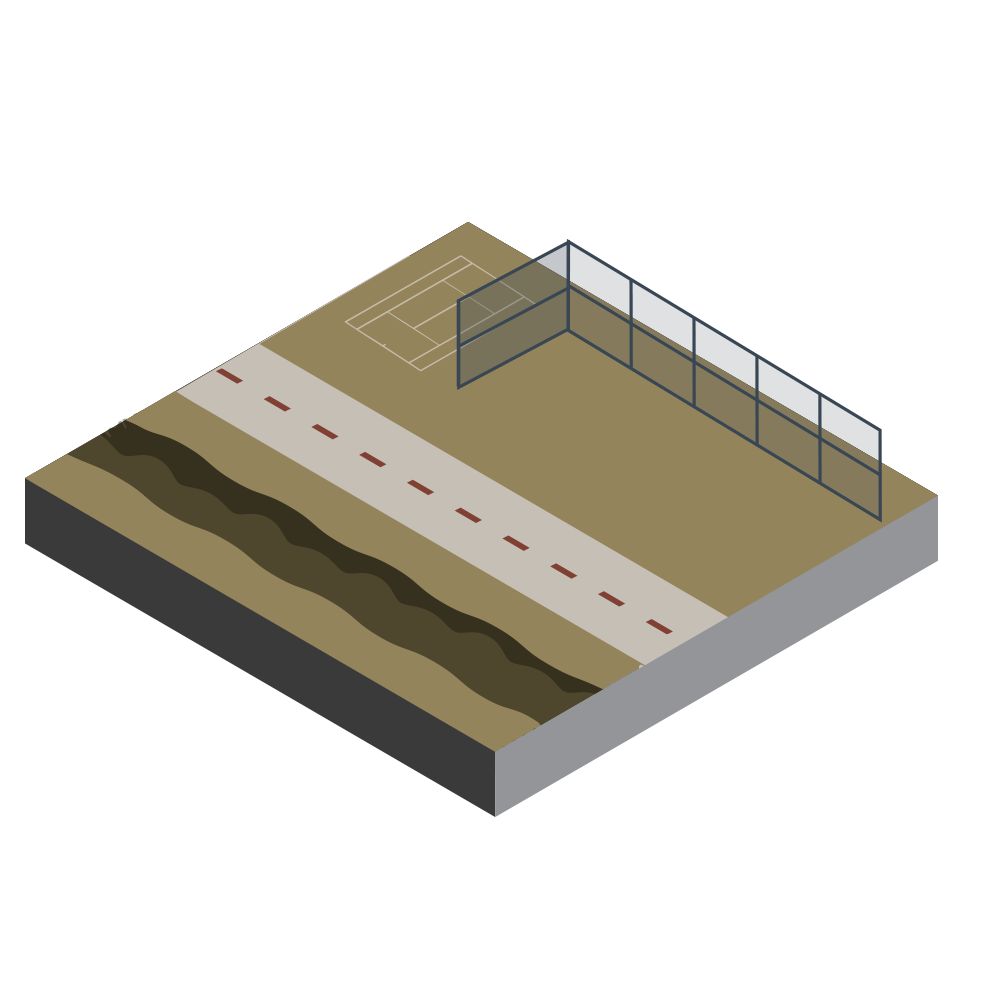 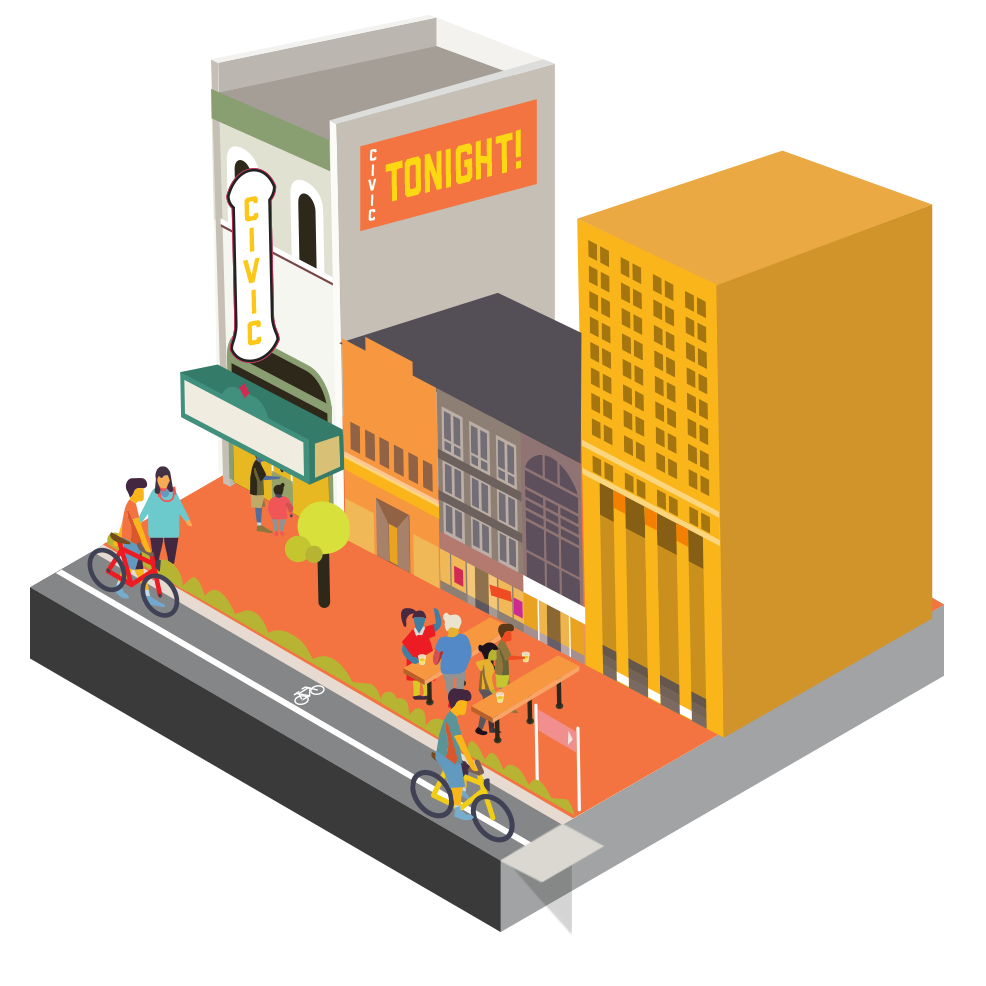 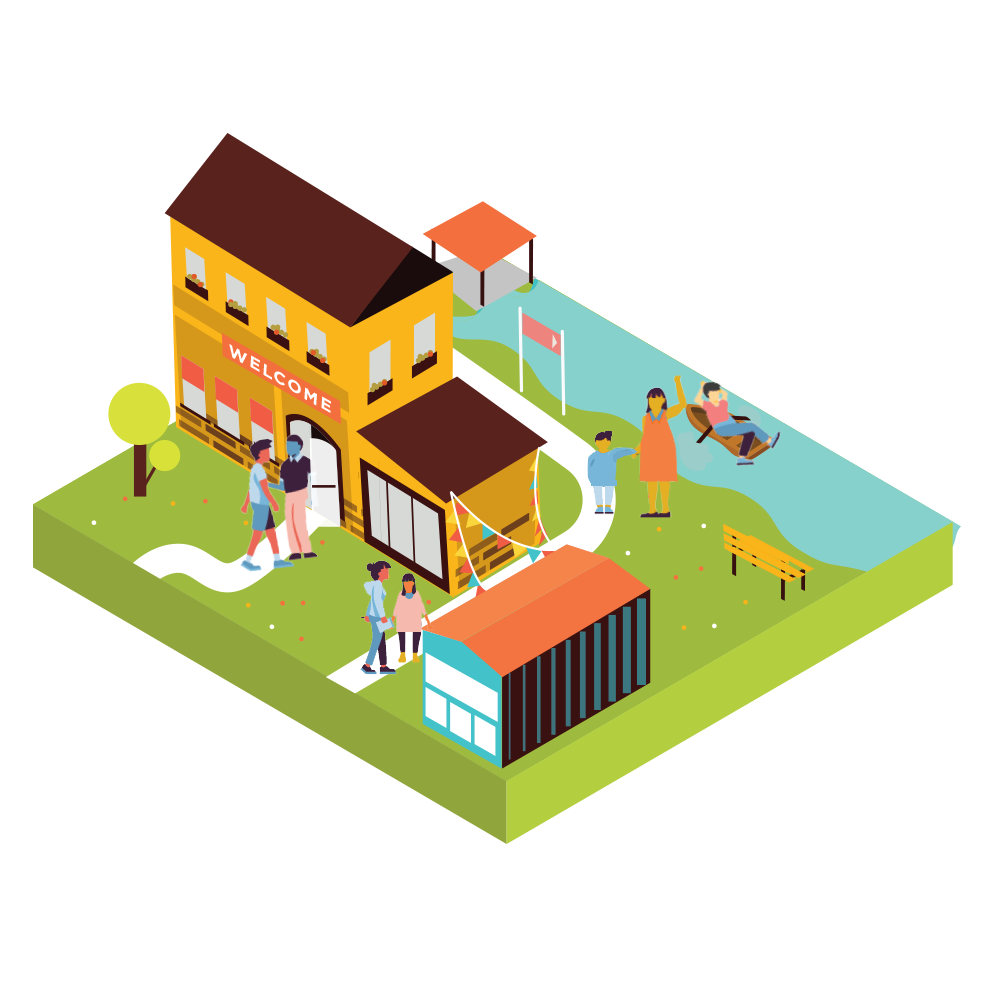 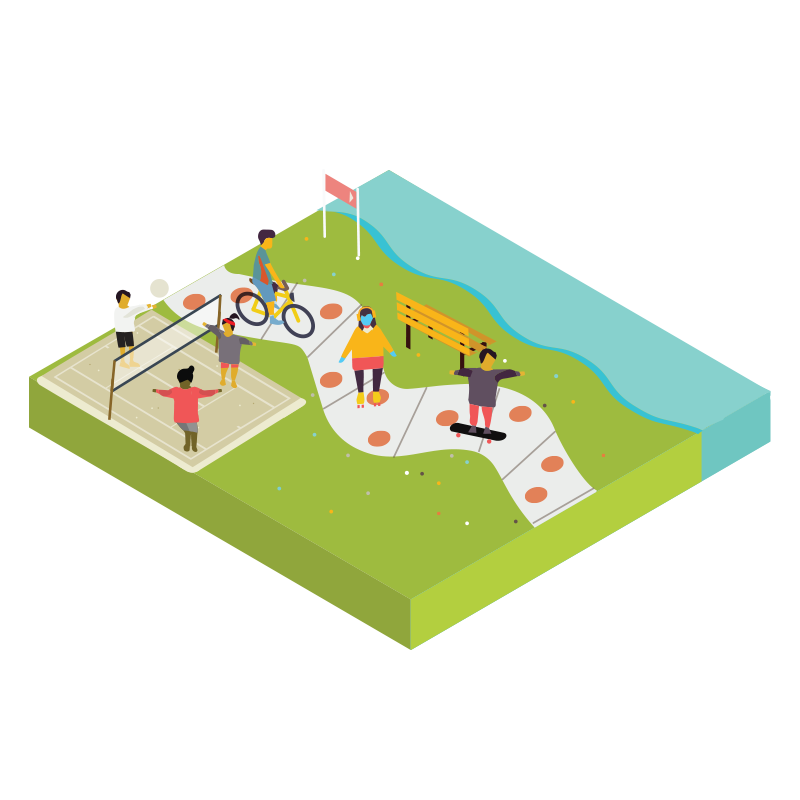 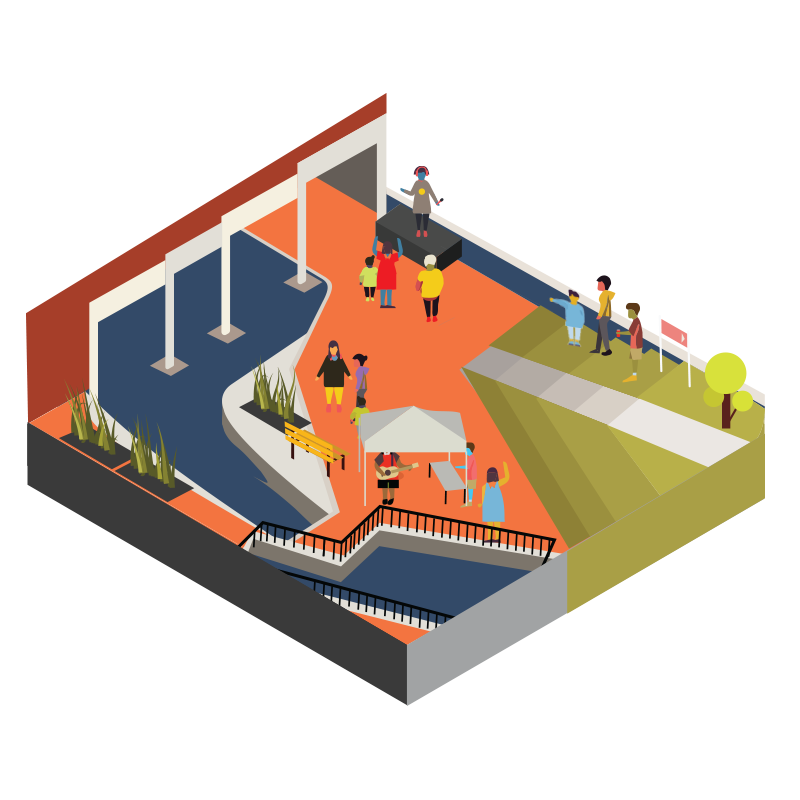 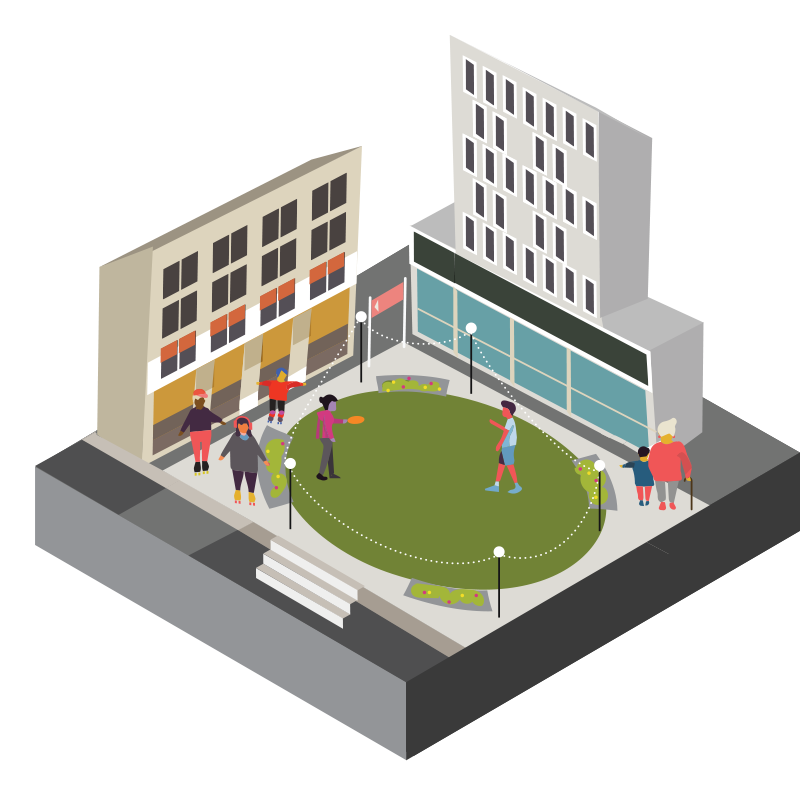 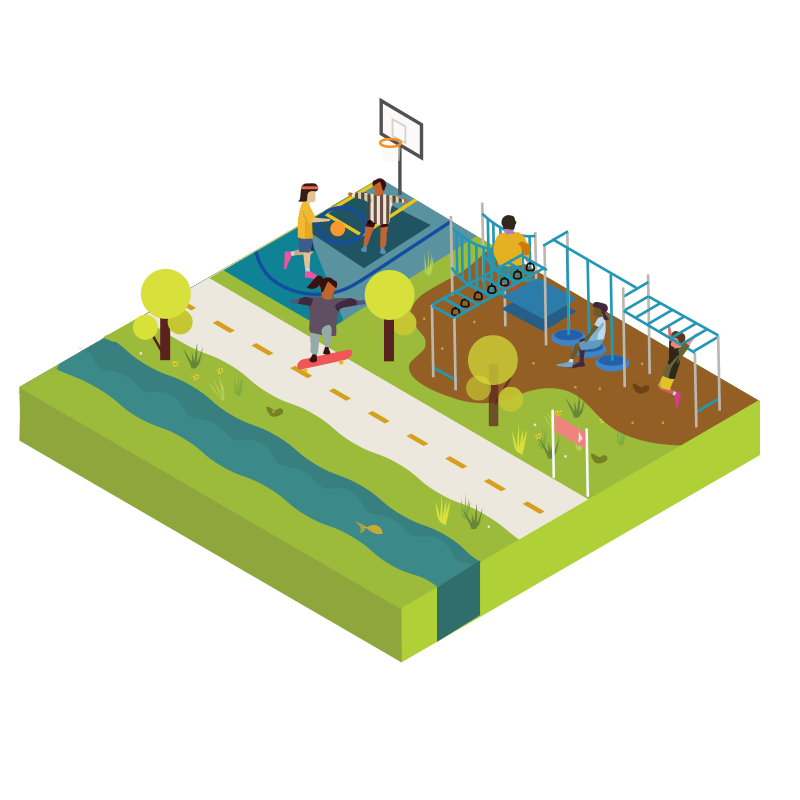 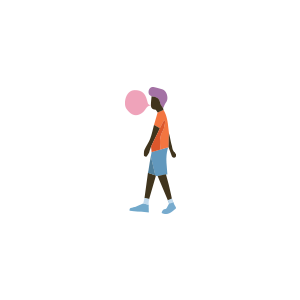 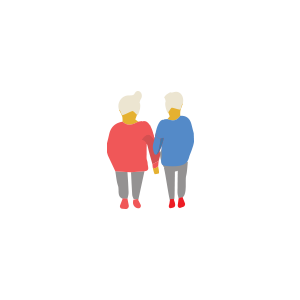 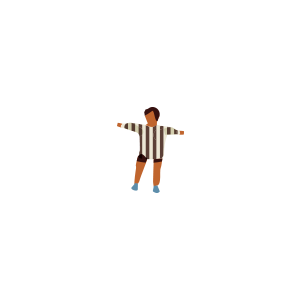 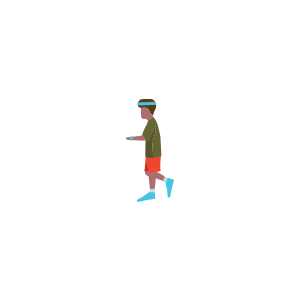 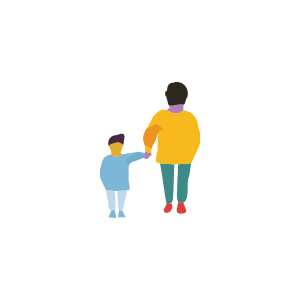 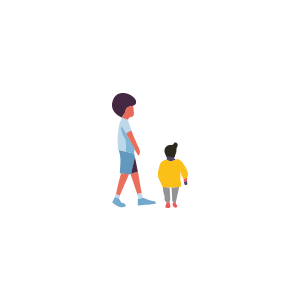 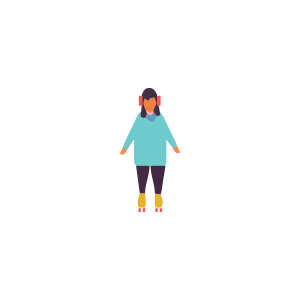 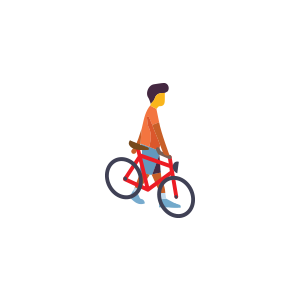 Lock 4 Park
Summit Lake
Cascade Plaza
Ohio & Erie Canal Park
Summit Lake
Towpath Trail
Civic Theatre
Ohio & Erie Canal Park
civicengagement
With new greenery, lighting, seating, and programming, Locks 2, 3, & 4 Parks are popular retreats that people visit frequently.
At Summit Lake, it’s common to see volunteer groups pitching in on the weekend to keep the lake clean and enjoyable for all.
socioeconomicmixing
New programming on Cascade Plaza, including roller skating nights and Zumba classes, attract a diverse crowd of people
As opportunities for play at every age increase within Ohio & Erie Canal Park, people are making acquaintances with strangers.
environmentalsustainability
The health of Summit Lake has improved, offering the opportunity for kayaking, fishing, and other water activity.
Upgrades to the Towpath Trail are attracting people to bike or walk to their destinations, lowering Akron’s carbon footprint.
valuecreation
Developing commercial and residential buildings add value to street level near the Civic Theatre. Cafes and outdoor seating are bringing more life to the street.
With more people in Ohio & Erie Canal Park, perceptions of safety are going up as residents actively take ownership and demonstrate stewardship of public places.

Akron’s demonstration focuses on three sites and the connection among them:

Civic Gateway:
Located on the northern end of downtown, the Civic Gateway is comprised of a variety of recreational and social amenities, including the Akron Civic Theatre, Locks 2, 3, and 4 Parks, and Cascade Plaza. Design and programming across these assets reimagines the Civic Gateway as the animating civic heart of downtown, connecting thousands of office workers in nearby buildings with downtown and neighborhoods residents.

Summit Lake:
Once the “million-dollar playground,” Summit Lake is reimagined as a platform for activities such as bicycle shares, guided canoe trips, community gardens and cultural programming to attract local residents and trail users from throughout the region. These investments shift perceptions about and increase the use of the lake while improving ecological conditions, all of which generate new value for the area.

These assets together create a chain, all connected by a linking, equalizing asset: the Ohio & Erie Canal Towpath Trail.

By testing ideas through creative prototyping, Akron is seizing the opportunity to dream big and fail fast, all in service of achieving success sooner. These projects offer a new model for community engagement, honoring all through the co-creation of a civic commons that brings citizens together as part of their daily lives. 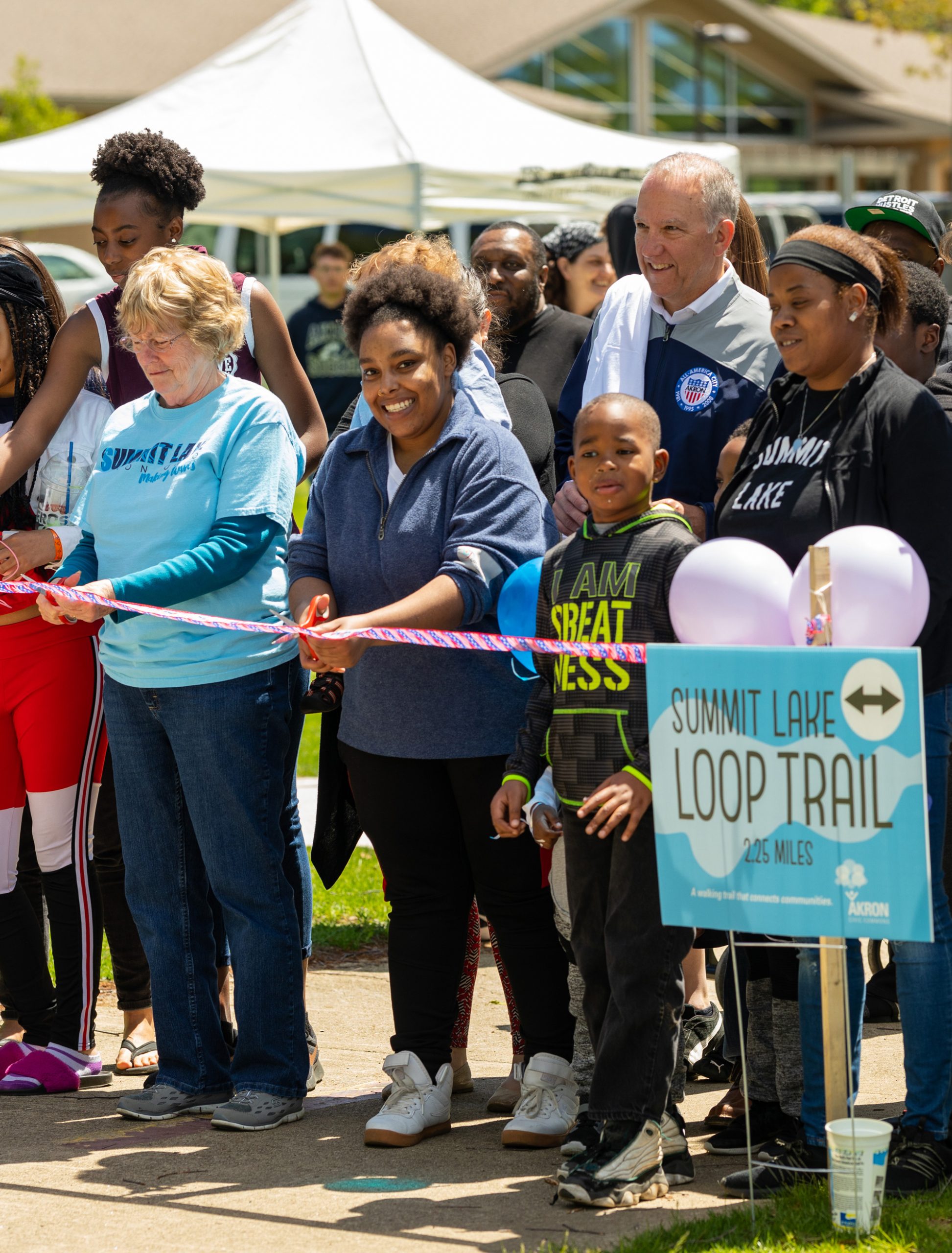